In his book ‘My Theory’ of 1917, Einstein described a spherical Universe. 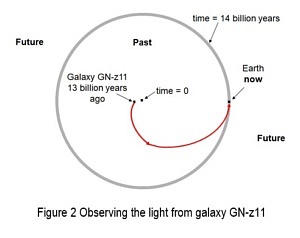 He abandoned his model in 1931, after seeing astronomer Hubble’s work on the redshift of distant galaxies. Now, we revive Einstein’s model by using Minkowski’s space-time. This results in a Universal model which needs neither Dark energy nor Dark matter, reviving Einstein’s model into a true space-time model: the Einstein, Minkowski, Robertson, and Walker (EMRW) model. Our EMRW model replaces the current FLRW model with help of Noether’s theorems. The Big bang is replaced by the Hubble horizon and a Advanced Hubble law is introduced. All properties are discussed and the model elegantly explains all known observations. The Appendix shows the formulas and calculated values.

Einstein wrote about the influence of gravitation on time in his theory of General Relativity. Then came Emmy Noether’s theorem: Energy...

Einstein published his theory of General Relativity (GR) in stages. Based on these publications, Karl Schwarzschild found two exact solutions in...